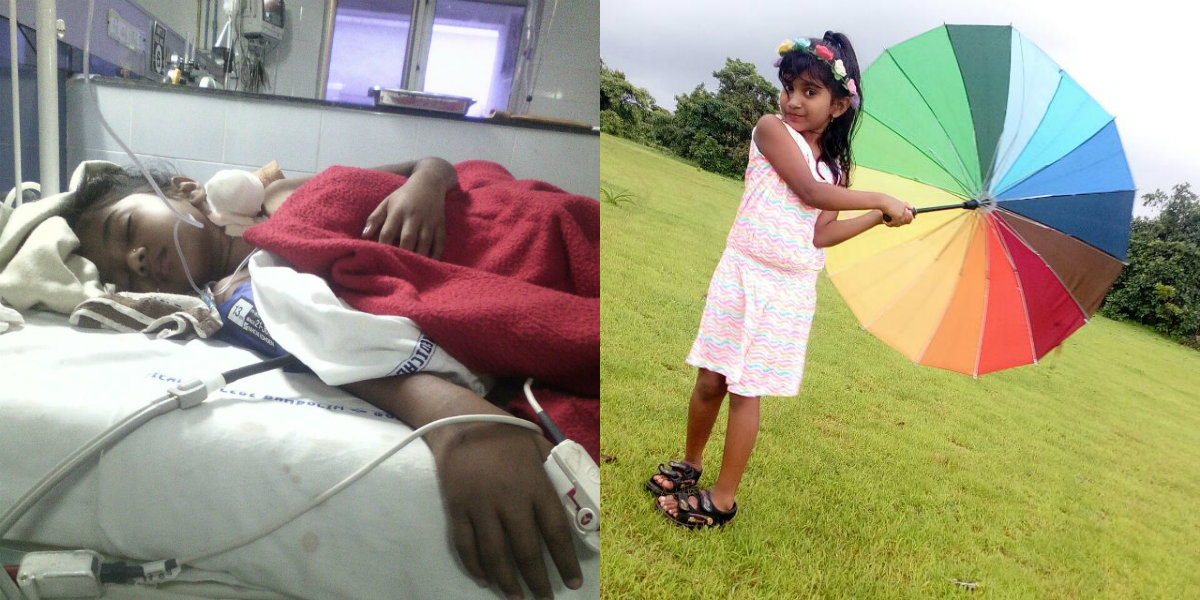 Home CAUSE “I Want to Study,” Says 9 Year Old Sanskruti Who is Suffering...

It is not possible to understand the amount of pain a family goes through when one of their beloved ones suffers from a medical condition that doesn’t have a cure, and that can lead to the multiple organ failures. The case of 9-year-old Sanskruti is no different. Sanskruti is suffering from a rare disease called “Goodpasture Syndrome” which is the 1st case in Goa and 25th in the country. The most shocking thing here is that Goa’s apex Medical facility GMC (Goa Medical College) does not have the types of equipment to handle this medical condition.

Following the article on Sanskruti which first appeared on a local daily, the Incredible Goa Team decided to visit her parents to understand as to why GMC had recommended them to a private hospital where the bill came out to be whopping Rs. 3 Lacs. The Incredible Goa team also tried to get in touch with the Health Minister of Goa, Vishwajit Rane in this regards, but he did not respond back to our messages and calls.

There are various angles to this case which makes it very important. The first angle here is the GMC (Goa Medical College) which does not have the facilities that private hospitals have, and that facility is known as “Plasmapheresis”. The second angle is the medical card that is issued under the DDSSY Scheme does not really gives much relief to the people of Goa, and the last but not least is the pain of the parents of the child who comes from a poor background and could not able to support the medical expenses of their child.

Sanskruti is only 9 years old, and she may not be able to understand the reason behind all the pain she is going through. She doesn’t understand why her mother keeps crying and how her father is trying to meet the ends with the limited resources available to him. She needs to go through the Dialysis every alternate day as both her kidneys are not functioning at the moment. A fourth standard student, Sanskruti cannot go to school like all her friends, but she wants to study. Being the brightest student of Don Bosco School in Tuem, she gets 90% marks, a young school going girl was diagnosed with the rare disease this year during her last academic month in school, tells her parents.

According to the parents of Sanskruti, she fell ill in the month of March, “One day during the time of Holi she fell ill. High fever and vomiting continued, and after the doctors failed to treat her fever, which kept rising, she was shifted to GMC from the district hospital in Mapusa,” said her parent adding that there is lack of facilities in the district Hospital in Mapusa. “At GMC, Sanskruti underwent various medical tests but the doctors were not able to do the correct diagnosis of her medical condition until finally she was referred to a Kidney Specialist who advised her to perform some more tests,” said her father Sudhakar Kamble.

The final test of Kidney was the riskiest one according to the doctors, and they took the consent of the parents before performing the same on Sanskruti. “A child kidney specialist advised us to perform the last test which was risky but would detect her sickness. The test involved high chances of blood loss. Initially, we were not ready to do that, but there was no choice before us and her health was deteriorating day by day,” said Sudhakar. Finally, Sanskruti went through the last test and was diagnosed with Goodpasture syndrome (GPS). “Sanskruti was tested positive for Goodpasture syndrome a rare autoimmune disease in which antibodies attack its own healthy tissues/cells thus damaging the basement membrane in lungs and kidneys, leading to bleeding from the lungs and kidney failure,” he added.

As it can happen to anybody, the diagnosis of a rare disease came as a shock to the parents of Sanskruti, and they could not believe as how such things could happen to them, but there was nothing that they could do but to accept the reality and start working towards resolving it.

“We were in a state of trauma after the doctors told us about her medical condition. Sanskruti has two more siblings one elder to her and second is younger and both of them are schooling. We have limited resources, but the pediatric doctors were kind enough to explain to us about how the disease attacks its own healthy body organs, and how they are going to counterstrike the same. The doctors also gave the brief idea of the amount of money required for the treatment and following of strict medications and dialysis routine,” said Sudhakar

Following the diagnosis of the disease, the treatment of Sanskruti began at GMC, but to their shock, Sanskruti’s parents realized that the GMC had no proper facilities for the Dialysis and plasmapheresis. “Although we found that the doctors were very helpful at the time, we cannot say the same about the Hospital. GMC lacked the dialysis machine for the treatment, and a treatment involving the plasmapheresis which helps in removing the harmful antibodies from the blood,” said Sudhakar.

The treatment demanded a huge amount of money, and since the parents of Sanskruti were asked to go to the private hospital for the treatment of their daughter from the GMC, Sudhakar and his family found it very difficult to cope up with financial needs. The medical card issued to them by Deen Dayal Swasthya Seva Yojana (DDSSY) was not sufficient to fund their requirements despite its existing limit of Rs. 4 lac, and the same came to realization of Sudhakar only after they were asked by GMC to shift to the private hospital called Healthway, situated at old Goa. “As per the Doctor’s recommendation from GMC we shifted Sanskruti to Healthway Hospital at Old Goa where Sanskruti underwent the dialysis and plasmapheresis treatment, But we were unaware of another shock that soon came from the Healthway and that was the bill of Rs. 300,000,” said Sudhakar.

It is not alone the bill that gave him the shock but the way it was presented. According to Sudhakar, the doctors told him the estimation of Rs. 80,000 to Rs. 100,000 initially, but when the bill was presented to them the amount reached to Rs. 300,000 the second shock they received was the limit of their DDSSY card which was supposed to be Rs. 400,000 but they have been told that they could only claim Rs. 40,000 in the first phase and Rs. 23,000 in the second phase, and rest they were supposed to arrange themselves. “The doctors did not allow us the discharge without paying the entire amount of Rs. 300,000,” said Sudhakar.

Sudhakar Kamble who worked as a salesman in Shetye Sales Syndicate Mapusa is presently jobless due to the undivided attention of his ailing daughter, and his wife is a housewife. He had no resources to arrange the funds and had to sell all the jewelry to arrange the money. “But despite that, we could not manage to arrange the amount. The rotary club gave us Rs. 50,000 and 1098 Child Helpline also helped us. MLAs and Ministers gave excuses. Till this time I could manage to arrange only half of the amount,” said Sudhakar.

It was the time when everyone turned their back on Sudhakar one businessman from his village came to his rescue. “I can call him a savior, his name is Jeet Arolkar who transferred around Rs. 1,70,000 into my account which I paid to the hospital and got my daughter discharged,” he averred. The people from the village were kind and helpful towards Sudhakar’s family. The management of Don Bosco School allowed the leave to Sanskruti by giving a major relief to her. Sanskruti a highly studious girl wants to do her studies. “She is one of the toppers in her class, and although she had been allowed to stay at home and study, she still wants to attend her classes.

After the discharge from Healthway, Sanskruti has been undergoing the dialysis on every alternate day at the district hospital in Mapusa. Presently the count of her antibodies has gone down substantially, but it is still above the average. “The normal counts of antibodies in the human is -7 while Sanskruti had 650 counts which came down to 53 during the regular plasmapheresis at Healthway, and now the same has shot back to 95,” said Sudhakar.

The doctors at the hospital appreciate the courage of a small girl who is supporting them in the treatment despite the high level of pain she has to suffer during the dialysis process. The condition of Sanskruti is getting stable with the time, but she has not yet come out of a danger.

Sudhakar has only one appeal to the government that they should set up the facility of plasmapheresis at GMC, and they allow the complete benefit of DDSSY scheme to the people who cannot afford to pay their medical expenses, especially in the case of a rare disease like “Goodpasture Syndrome”. “I don’t want any other kid to suffer like my daughter is and hence I appeal to the Government to set up the plasmapheresis unit at GMC as everyone cannot afford the expensive treatment at private hospitals in Goa,” said Sudhakar.

According to Sudhakar although his DDSY card has a value of Rs. 400,000, but he had managed to get the benefits of Rs. 63,000 only. The doctors have given a time of three months to Sanskruti before her kidneys may begin to re-function again normally. “According to the doctors, the body regenerates the cells and heals itself with the time, and based on this formula the Kidneys of Sanskruti may also recover completely and start functioning again. The school and doctors earnestly praying for the recovery of Sanskruti, and hope for a successful victory on their first case,” said Sudhakar.

The family of Sudhakar deeply appreciates the help from Childline 1098 for supporting the family in their worst times. They are also grateful to Mr. Jeet Arolkar who not only helped them financially but has also arranged an ambulance for her regular dialysis.

Sankskruti survives. She is a survivor, headstrong and a fighter who is fighting the disease at this tender age where an adult would give up. She is a perfect example of a person who makes a life worth living and days not wasting. She is mostly kept indoors because of her weak immune system, but she does not let these hindrances come in her way to continue her school. Team Incredible Goa wishes her a speedy recovery.

UPDATE: SANSKRUTI IS NO MORE, TODAY IS HER BIRTHDAY, AND SHE HAD A LAST WISH TO CELEBRATE HER BIRTHDAY… MAY HER SOUL REST IN PEACE…