Going to Baga Beach with the help of Google Maps? Please read this interesting story before you do that 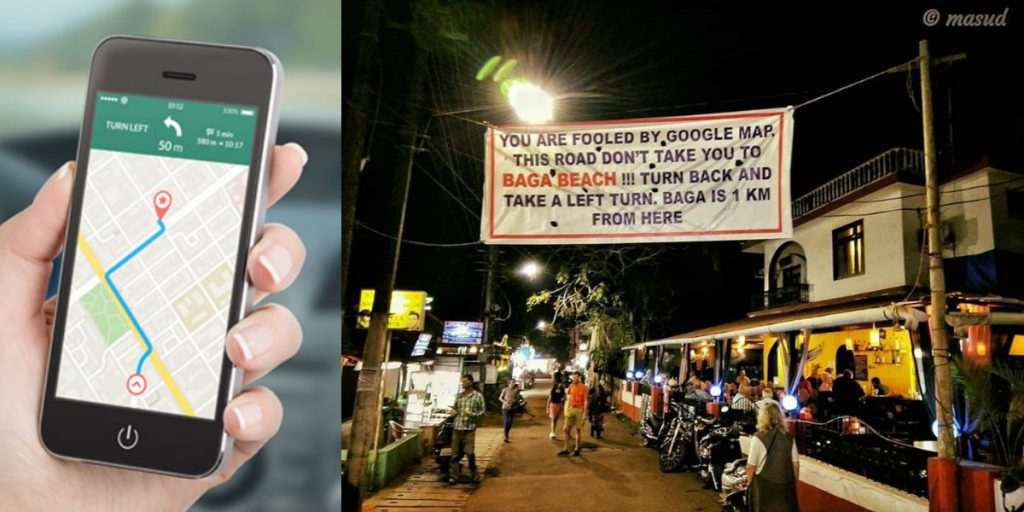 Baga beach has become one of the most talked about places for domestic as well the foreigners and most of the people traveling use their own vehicles making use of google maps for reaching to Baga or any other place for that matter but here is a hitch, if you are  trying to reach to Baga with the help of Google Maps then you must read this before you start.

Google Maps is one of the most reliable applications in the world. It not only keeps a track of your location and destination but also shows distances between two points, the estimated time of arrival and also the traffic conditions prevailing on various roads of a city or town. However, there are times when the most reliable Google application makes mistakes in charting correct routs, thereby prolonging the travel time.

According to the Times Now, One such place in India, where Google Maps are known to make mistakes, is Goa. The route to Baga Beach from nearby hotels can often be a tricky one and tourists often depend heavily on digital maps for directions.

Wow so sweet of whichever good samaritan did this lol. I’ve never thought beyond raising an error report

However, some of the routes Google Maps suggest, may not turn out to be the correct routes after all. People have been led to locked gates, walls, and sometimes, no roads in sight. People are also led through parks, over canals, and sometimes, Google Maps seems to suggest that you can scale the wall in front of you, and then “continue 300m straight.”

That is insane!! but that is how sometimes technology works and at this point of time either the local person of the manual map comes to your rescue, because unless you have no clue how to reach your destination you tend to use the google maps as the most trustworthy partner and many a time after some new developments taken place the map still remains the same.

Increasingly the internet drives everyone and everything in the real world. What if this is a growth hack by the shops And businesses on this road ? 😁 https://t.co/f0M3W6vp1u

In one of the most innovative initiatives taken by the residents of Baga, they have installed a banner in the middle of the road saying “You are fooled by Google Map, this road don’t take you to Baga Beach. Turn Back and take Left Turn. Baga is 1KM from here.”

This went viral on social media like Twitter, Facebook and WhatsApp creating the multiple reactions from the people who have already faced a similar situation, thanks to Google Maps.

While reporting an error on maps for some, the banner proves that perhaps there is more than just that to ‘Customer feedback.’ Baga is one of the more popular beaches in Goa, and attracts tourists through the year.

So many times @GoogleIndia maps led me to the same situation. But never encountered such a hilarious milestone https://t.co/SkIOFIEOcq

This is not alone in the case of Baga but many other tourist destinations have similar fate on the google maps and there is a need of similar initiative from the other parts of Goa too to help the people who are getting lost while trying to search the places in Goa.

What is your view on this piece of article? have also gone through such situation? Please do share your experience with us as for how you managed to get to your destination when google maps ditched you??

Join the growing list of subscribers!
Advertisement
PrevPreviousYou Can Do Much More Than Just Visiting Beaches and Bars While in Goa
NextGoa’s Nude Hippy Days are Gone, Now Hippies are replaced by the Domestic YuppiesNext