Incredible Goa
Home AWARENESS Garbage Dump and Plastic is Causing Hazard to the Marine Life in... 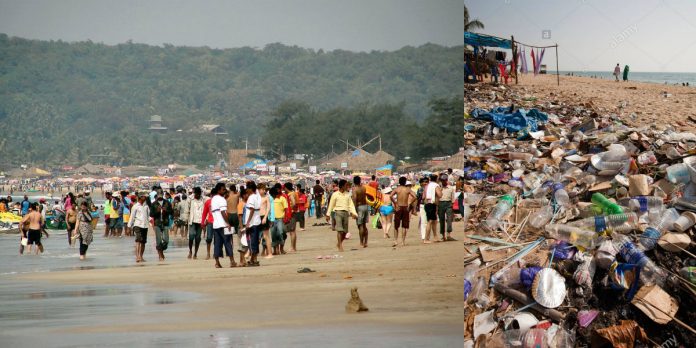 Fishing is one of Goa’s traditional businesses and many families in Goa still have their staple food as Fish Curry and Rice. Considering the marine life getting affected with the garbage, chemical and plastic are becoming a serious concern for the food habits of Goans. You can be no more sure that you are consuming a chemical less fish. If this is not stopped then soon we will have the fish which is similar to the kind available in Mumbai.

Goa, with no doubt, has some of the most stunning beaches in the country. The majestic beaches along with the sunsets are a view that is close to heaven. The popularity of beaches in Goa is worldwide and millions of tourists flock to the state to visit these beaches every year. But in the recent decade, due to the growing tourist footfalls, the beaches of Goa are being stripped of their beauty and pollution has been taking over the lands. Plastic and liquor bottles, cigarette buds and chemical aggregates are some of the ingredients that have been spoiling the beaches of Goa.

Crowding of beaches and irresponsibility of tourists has led to the beaches being unclean and polluted. Goa is home to several species of marine life that have resorted to shelter in the oceans of this coastal state. Due to these careless activities of humans, these species are facing grievous dangers. Due to the plastic debris and chemicals mixed with the water bodies, the marine lives often are injured and ingest this garbage, which may cause fatal consequences to the lives of marine animals.

According to a study conducted by National Institute of Oceanography, Marine organisms along Goa’s shoreline are facing a threat from the huge plastic debris that gets washed ashore during the monsoon season. After studying six beaches and drawing a conclusion, the research paper published by a team of Goa-based NIO scientists and researchers says “plastic coupled with accidental spills from vessels during their transport through shipping routes, is posing a bigger challenge to the coastal environment”

According to NDTV, the paper ‘Characteristics, seasonal distribution and surface degradation features of microplastic pellets (MPPs) along the Goa Coast’ stated that “The onshore plastic, plastic debris moved in during the monsoon season and ocean-based sources, may lead to a major threat to marine organisms,”

The possible threat was caused through MPPs that are usually spilled over from ships that pass through Goa’s coast. They are contaminants that cause serious threats to the lives of these animals and due to the strong ocean currents that pull these contaminants to the further parts of the sea.

According to Navhind Times, A four-month sample survey carried out by Terra Conscious as part of the ‘marine wildlife stranding network: ocean watch – Goa’ has found a total of 40 stranding incidents of which 22 animals were rescued while 18 died.

The survey reveals that superficial injuries were found on many of the stranded and dead animals. These injuries were caused due to the animals getting entangled in fishing nets, and anthropogenic activities say the survey. These activities are adversely impacting the lives of these animals.

Studies showing high concentrations of microplastics laced with chemical pollutants in fish tissue are found at various beaches of the state. According to the Times of India, with the presence of heavy metals in fish due to water pollution, the addition of toxic elements from plastic will likely make seafood even more dangerous to consume.

The pollution of the sea is a major issue that the Government of Goa must focus on as the cuisine of Goa is mainly based on the seafood dishes. And the tourism of the state is also a major aspect that will be affected by the pollution of beaches and deaths of marine animals. Efforts must be taken to prevent pollution and necessary actions must be adapted to clean up this mess and protect marine life.