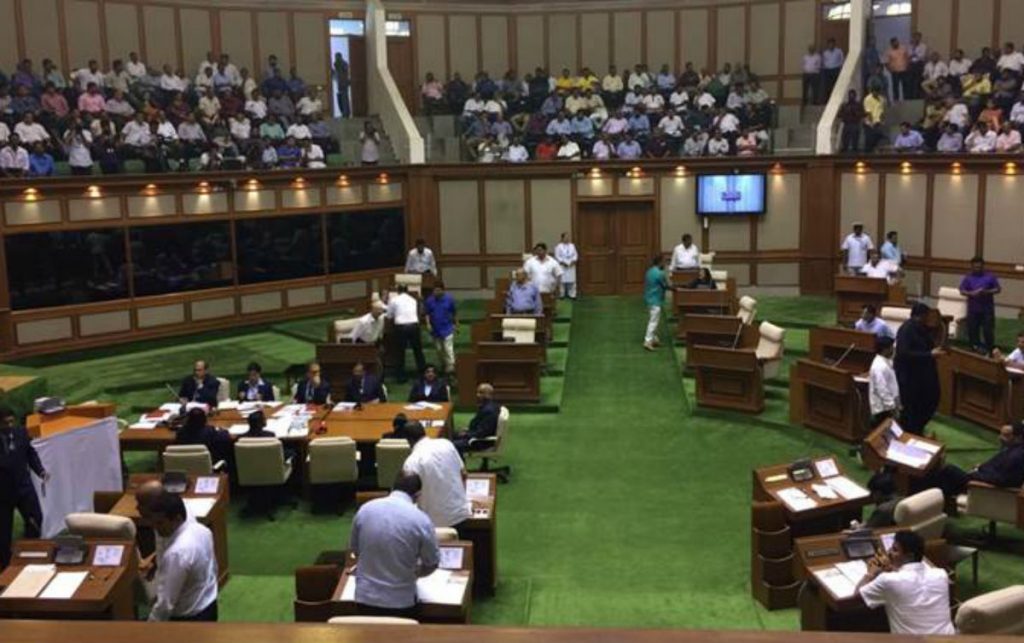 The floor test should be done when there is a doubt or possibility of the other party having the neck to neck competition in the 40 member assembly which is now reduced to 36, Congress has 14 members, BJP has 11 members while the two regional parties and independent consists of 9 members.

Following the death of Manohar Parrikar, senior BJP leader Nitin Gadkari entered in Goa and started the meeting with all the MLAs one to one throughout the night and made sure that support is secured for the party to retain the government in the state.

According to the sources, BJP president Amit Shah and Union minister Nitin Gadkari played major roles behind the scenes ensuring the party retained power in Goa, after the death of Manohar Parrikar, sources familiar with the developments said.

It may be recalled that in the year 2017, after the BJP failed to get a majority in the state Assembly polls, Gadkari had flown in here to help the BJP in cobbling up an alliance with smaller parties in the coastal state, after which a government was formed under Parrikar’s leadership.

According to the News 18 When Parrikar died on Sunday after battling pancreatic cancer, the BJP swung into action even as MLAs of ally Maharashtrwawadi Gomantak Party (MGP) huddled in a meeting. Vijai Sardesai of another alliance partner Goa Forward Party (GFP) along with his own party members and other independent legislators, including ministers Rohan Khaunte and Govind Gawade, also began holding meetings.

Finally, after becoming the 13th CM of the state, Pramod Sawant went to face the floor test on Wednesday with the support of 9 MLAs consisting of two regional parties and 3 independents.

According to News 18, Goa Chief Minister Pramod Sawant on Wednesday proved the majority of his BJP-led government in the Assembly, comfortably winning a floor test in the House. Twenty MLAs voted for the motion of confidence in the two-day-old government, while 15 opposed it. The 15 consists of 14 Congress legislature and 1 NCP Candidate Churchill Alemao.

The report further states that the special session of the House was convened by Governor Mridula Sinha to conduct the floor test after Sawant was sworn in as the CM during wee hours of Tuesday. Besides 11 members from BJP, three each from Goa Forward Party, MGP and Independents supported Sawant during the head count conducted in the House.

The two small regional parties, Goa Forward and MGP have three MLAs each which makes the majority of stakes for forming any government. Both the leaders of the regional parties were offered the post of deputy chief ministers by the BJP to stay with the party.

The combination of the coalition remains the same only the leader has changed and the same have been accepted by everybody to remain in the power at the moment. There is no doubt that this coalition will go the long way unless one of them decides to quit.

Besides that, the forthcoming by-polls going to the game changer in the Goa’s political arena and everyone is waiting for the moment. What are your views? Will BJP going to finish its term with the help of coalition or they will be ousted by the Congress in the by polls?