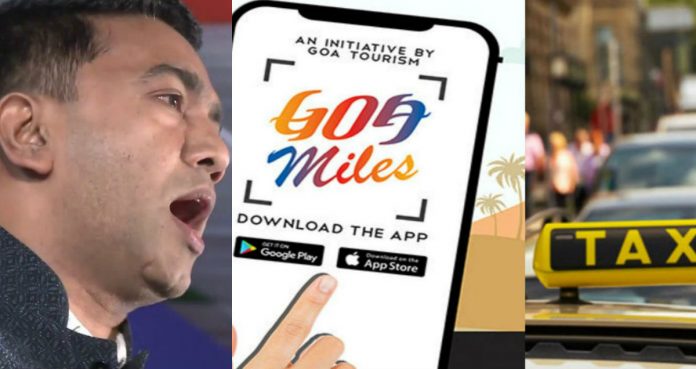 GoaMiles being Goa’s first taxi aggregator receives a lot of opposition from the Taxi Lobby in Goa and despite several negotiations and intervention, there seems to be no concrete solution coming out of this. According to the reports, CM Pramod Sawant is not ready to withdraw from the GoaMiles app since it is creating a positive remark amongst the tourist and locals alike.

If the taxi owners were not satisfied with the app-based service then the government was willing to review the functioning of the app or introduce an app specially designed for the local taxi unions.

The Congress, on the other hand, staged a walkout, as they were firm on their decision that GoaMiles be scrapped.

The CM also said he can assure taxi owners that there would be 100% business and that it was possible for a taxi driver to earn Rs. 40,000 per month if they registered themselves with the app.

Sawant condemned the aggressive language used by the taxi unions and the fact that there was infighting amongst them when a taxi affiliated to the North Goa union picked up a passenger from South Goa.

“The Government will not change its stance on GoaMiles. This practice must stop” the Chief Minister said during a special discussion on the GoaMiles issue.

Transport Minister, Mauvin Godinho challenged the opposition’s allegations that the Government was trying to destroy Goa’s taxi sector. Godinho presented data that shows the State had disbursed almost Rs. 16 crore in the form of subsidies to tourist taxi operators to replace their old vehicles.

Godinho also stated that tourists, as well as Goans, were happy with the app-based services and the only ones unhappy were the taxi union leaders as they have been given a wrong understanding of GoaMiles.

He further added that he had the concerns of the local taxi owners’ with the management of GoaMiles.

“Goa Miles has agreed to appoint a coordination director who is elected by the taxi unions to vet taxis that are taken onboard GoaMiles. They will ensure that only union members are registered on the app” said the Minister. He also requested GoaMiles to contribute Re.1 from the Rs.15 earned per transaction to the taxi drivers’ fund.

Godinho claimed that he had conducted a survey of 10 tourist taxi owners who operate on the app, and said they earn an average of Rs. 5300/- per day. He further added that the average monthly earnings of one of them is Rs.95,288/- per month, with each kilometer fetching Rs.19/-

Even after all the statistics provided on the floor of the House, Congress still insisted on the app being withdrawn. Congress MLA Aleixo Reginaldo Lourenco blamed the government for not consulting with the existing taxi owners when bringing out the app He claimed that the app was forced on them and that it be scrapped since it belonged to outsiders.

NCP MLA Churchill Alemao said the taxi owners have agreed to install speed governors and digital meters and as such there was no need for an app-based service.  He also insisted that a 25-year-old domicile be made compulsory for the drivers.

At the end of the long discussion that went on till 10.55 pm, the NCP MLA said the decision should be left with the taxi unions.

Among the legislators, Atanasio Monserrate, Rohan Khaunte, Glenn Ticlo, Dayanand Sopte, Pravin Zantye, and even Ramkrishna Dhavalikar were in favor of an app-based system. On the other hand Alina Saldanha Vinoda Paliecar, Jayesh Salgaocar, Wilfred D’Sa, and Isidore Fernandes brought up weak arguments against the app.

Meanwhile, the President of the Association of Tourist Taxi Owners of Goa, Chetan Kamat, said that taxi union members would discuss the statement the chief minister made in assembly and decide accordingly.