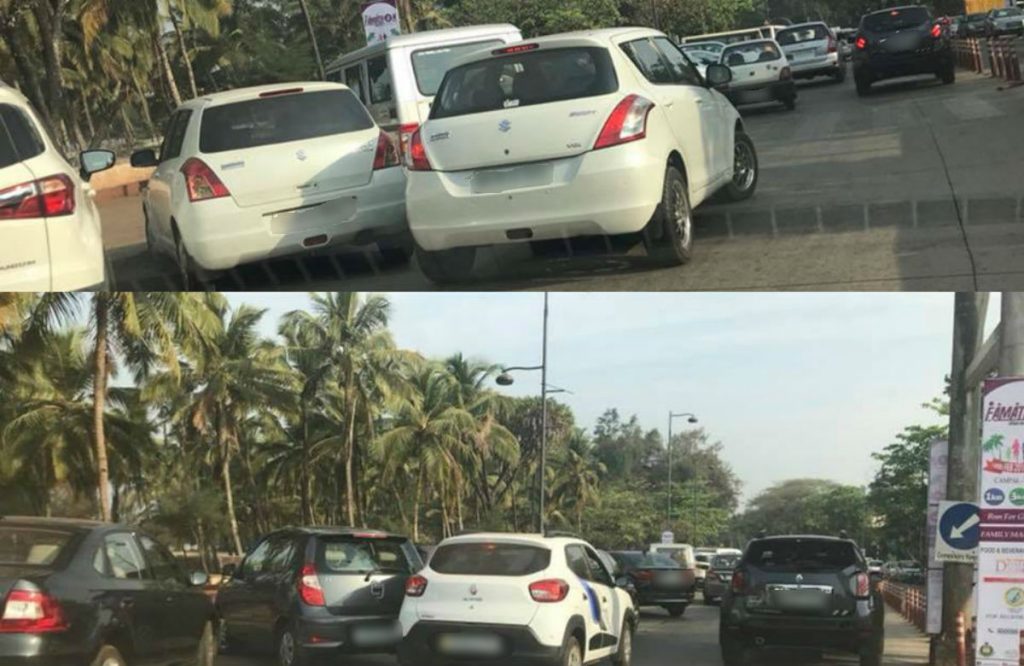 Goa is the place where every house owns or at least two or more vehicles for the purpose of commuting. Since public transportation lacks in the state, there is no other option but to have own vehicle for the purpose of transportation, but the lack of infrastructure and civic sense amongst the people causes a chaotic traffic situation at various places in the state and schools situated in and around the city are more prone to this.

The government has moved many schools away from the city to avoid the traffic chaos in the city but despite that, there are many schools in and around the city where the parents create the traffic issues for the other commuters.

One of the major traffic situations gets created near the Sharda Mandir School situated at Miramar. The Miramar – Dona Paula road is the major highway connecting the Panaji to Dona Paula and the same remains busy during the morning and noon every day with hundreds of cars parked on both the sides of the road creating a major traffic hurdle for many commuters, even the ambulance cannot move from the traffic.

Haphazard parking by the parents is the story of the day here and nobody is able to do anything till date as most of the lawmakers has their kids studying in this school.

Sharda Mandir is not the only school where the traffic situation goes out of the hands of the cops, there are other schools like People’s and Mary Immaculate where the roads are virtually blocked by the parents during the morning and afternoon.

What makes the Chaotic Traffic Situation is the lack of civic sense amongst the parents who do not care about parking their vehicles in the middle of the road just to drop their kids upto to the classroom.

According to a report published by the Times of India North Goa, Dharmesh Angle attributed the chaotic traffic situation experienced at the Cujira educational complex on Thursday to haphazard parking.

“Many parents halt their vehicles near the school gate and leave it there while they drop their children till their classroom. They park the vehicle in a haphazard and obstructive manner. In the time they stop and drop their children, a lot of congestion is created, which leads to a queue of vehicles being formed,” he said.

Angle appealed to parents to park properly so as to keep the thoroughfare clear. “It is an appeal to the parents to not create congestion. They must park their vehicle in a proper place, away from the carpet area, and only then walk their wards till the class. Otherwise, simply drop the ward to the gate and move ahead,” he said.

The traffic cell had deployed 6-7 police personnel near the educational complex on the first day, Angle said. Onlookers, however, said the officers hadn’t arrived until 8 am while the congestion had started around 7.15 am.

“We had sufficient staff on the Cujira road. The areas at Sharada Mandir school, Miramar, and People’s School, Mala, are also affected so we need to take care of them also,” he said.

The police will take care of the situation for some time and they will get busy with the other important work, but the question here is, whose work it is to maintain the harmony near the school and avoid the haphazard parking? There is a need for a civic sense amongst the parents and that will be the only permanent solution for the existing situation.