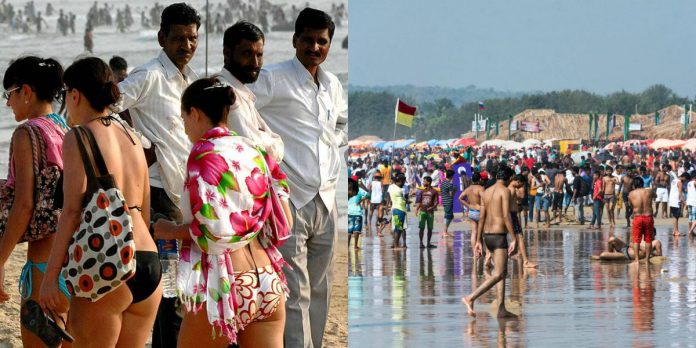 This is a very serious topic and a very important, lingering question. Goans, it seems, do not like outsiders: whether they be tourists, labourers or business-people. There might be several reasons behind this behaviour and most of the time it’s not wrong. We have done some research and tried to get you the best possible answers to this most asked question. Take a look…

Goa is an Indian state but the people of Goa are often completely different compared to any other part of the country. Indeed, Goa is seen as another country entirely by Indians all over the country. This is because Goan customs and culture is highly influenced by western culture, all thanks to four hundred and fifty years of Portuguese rule that made Goa different from the rest of India.

If you are not a Goan then you are labelled as ‘Ghanti’ or ‘Bhingta’, i.e. an outsider. Goans are peace loving and merrymaking folk and sometimes they do not like outsiders encroaching on their territory. According to a Goan, visitors can come, stay, eat, drink and go back to their states without creating any issues and there is nothing wrong in that, but the question is why do Goans not have respect for these fellow Indians, albeit from other parts of India?

Before we go into the details, we need to understand the people of Goa and their mentality. Goans have been ruled by the Portuguese for more than 4 centuries which is the longest period of colonialism by and far. The Portuguese left a  deep impression on the Goan culture and customs. Goa was a Portuguese colony while the rest of India was ruled by the British. Goa was liberated in the year 1961, more than a decade after the British left India and in fact, the Indian military pushed the Portuguese out of Goa.

Despite being a relatively smaller state, Goa has always had a very rich and vibrant culture. Goans have very high per-capita income and much of its population is highly educated compared to other parts of the country. Goa is also a major tourist destination with visitors from all over the globe flocking into the state.

According to one Rishi Jalan, who claimed to have stayed in Goa for some time, says that when Goa was liberated and became a part of India, it got exposed to people from other areas who were previously unable to visit. A small fraction of Goans saw the benefits of having European rule and that Independence wasn’t necessarily the best of things.

“I have spent half my lifetime in Goa and I know where this is coming from. Goans, discriminate to the extent that they have a Konkani word for the ones who come from other parts to Goa, as tourists or settlers. (The word is Bhingta). If you listen to them, they almost sound like the ‘pure bloods’ (Apologies for the Harry Potter reference). And I think I have become one of them, while I was there. These are some of the reasons why their hatred is totally justified.”

According to him, the following are reasons why Goans aren’t too keen on people from the other states of India:

Party Capital Tag – Goans love to party and are innately happy people but that doesn’t mean Goa is the Vegas of India. There’s genuinely much more to Goa than the low alcohol prices. This tag also brings with it some disrespectful people who feel they have the right to harass women and believe that every second person in Goa peddles drugs and other ‘stuff’’.

Dirty Tourism – Goans are warm and welcoming people who do not really bother you whilst you’re here for whatever you come to Goa for but local folk are proud to be clean, tidy people and are outraged, rightly so, by the garbage tourists leave behind without a care in the world.

High land prices – People buy property and land illegally in Goa to park their illegal money. This has taken land prices in the state to exorbitant prices and in turn, this means a Goan has to pay more money to make a home in their own state with land already a scarcely available commodity.

According to Vidyasagar Mekkalki who lived in Goa all his life, he never experienced such kind of discrimination for himself but saw that it happened to others. According to him, there is a certain degree of discontent in Goan schools that a lot of migrants come to the state and all the petty jobs that locals did are now taken up by outsiders. For a person who is older and has seen this transition, it is a little difficult to get over the fact that almost everyone you meet, from your barber to your vegetable vendor, doesn’t speak your language.

The local language Konkani was not a medium of instruction for a long time even after Goan independence in 1961 so they feel that their way of life is vanishing. Of course, we are responsible for it in a way as Goans have a higher per capita income than some parts of the country, so they prefer to take other, more meaningful, work.

Some people, especially lower-income earners, feel pressured by an influx of cheap labour so are obviously more hostile. In general people have a negative opinion on outsiders as most that come are from poorer backgrounds and are here to make a living and some find crime pays so thus furthering this stereotype. But for well-educated people who come to work, this isn’t usually the case, at least until they do something undignified (littering, etc). It has to be said that there is little that outsiders do to foster a better image, but most people who come and stay in the state integrate well and are well-respected.

Now what we have heard is from some people who have stayed in Goa but are not Goans so now let us take a look at what a  Goan native has to say about all this. According to a person who wishes to remain anonymous and who claims to be a Goan, he had seen what the migrants bring in to the state.

His view is that the rich and mighty from outside are buying off all prime land and making owning a piece of land far too expensive for the local Goan. “The middle-class migrants try to take our jobs to be it in the electricity dept or other government departments. The lower-class migrants are given political blessings and allowed to squat over our communidade lands for free and illegally occupy it. Which state would allow this? Today our own Goan population stands at just over the midway mark and soon we will be outnumbered in OUR OWN land. Which state would allow this?” he said.

More factors for hostility towards migrants could include uncivilised habits such as open defecation and spitting paan, crime rates rising, increased poverty (which hardly existed during pre-liberation Goa), lack of integration into local society… the list goes on. Our good nature and hospitality are being taken for granted and leading to our own downfall.

Maybe those wishing to settle in Goa should do little things such as learn the language. Those visiting the state shouldn’t come here and drink themselves into oblivion and should respect our beaches and our living spaces. It’s not a lot to ask.