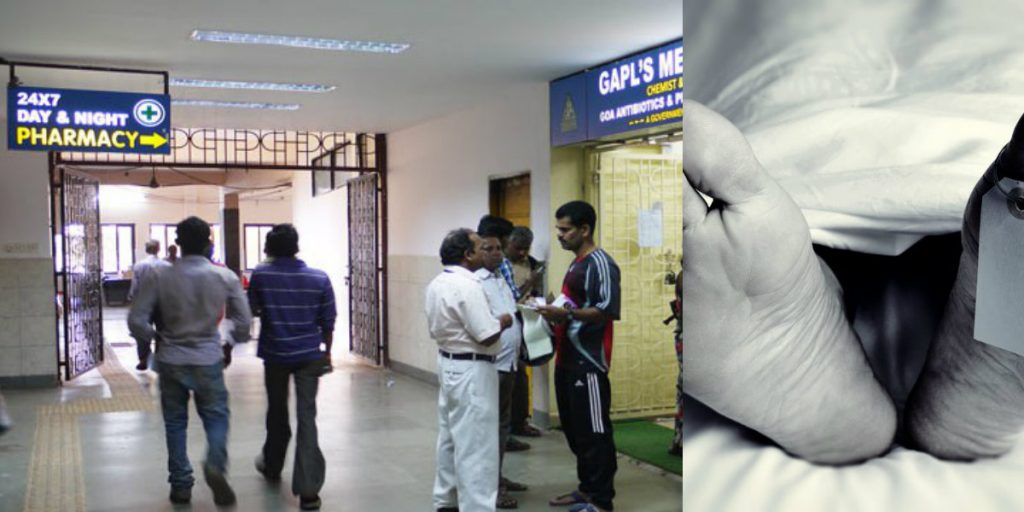 GMC (Goa Medical College) has always remained in the news due to various reasons, sometimes for the medical negligence and sometimes due to carelessness. The pathetic condition of GMC doesn’t remain hidden from the people of Goa, but despite that instead of improving the standard of the Goa’s only medical college hospital, the authorities seem to have preferred to turn the blind eyes towards it.

In this case the youth met with the road accident and first taken to the district hospital Mapusa despite the knowledge of the 108 attendants that such cases are not accepted by the District Hospital and the victim needs to be taken to the GMC, and when they were asked to take him to GMC all the time wasted had caused more damages to the victim.

After reaching GMC the victim was left unattended for almost one and a half hour where finally he breathed his last.

It is no joke when it comes to matters dealing with life and death. A life lost can be never replaced. There have been many cases of emergency situations not be treated properly and countless lives being lost due to carelessness.

In an extremely unfortunate event, a Goan youth named Aloysius Alvares met with an unfateful death due to the sheer negligence of the GMC Hospital. It is pitiful to witness a life slowly die due to lack of attention and care. If Aloysius was treated at the right time, he could have been saved. This truth haunts his wife and his sister, who is trying to raise awareness of road safety and the grievous apathy meted out to her brother.

Some even claim that this kind of behaviour is meted out purposefully so as to force people to admit patients in private hospitals. These kinds of events raise the question on humanity and morals of the Medical industry and make one fear about the safety of their health and lives.

According to Aloysius sister, Aloysius was travelling with his wife on a bike in the night. Due to lack of street lights, he had removed his helmet and handed it over to his wife as he was not able to see the road.

Aloysius was not under any influence of alcohol nor was he over-speeding. He met with an accident and had apparently injured his head. Aloysius after an accident at Green Park circle was taken to the District hospital by 108 where the doctors were unable to treat him.

This incident surely rages one with fury. It is completely unacceptable to lose a life due to negligence and lack of medical attention. Family members also explained their sadness over the lack of staff to even carry the patients at the hospital.  Is this the sort of treatment that is to be meted out to a patient in need of immediate medical attention? One can blame the lack of staff in the hospital but to leave a dying patient unattended for almost an hour is horrifying.

Aloysius sister also spoke on road lacking proper lights and facilities. According to the video posted by Goa 24*7, the accident of the victim occurred due to dashing on a dig in the night. The victim’s family mourns the death of the only person who was shouldering the responsibilities of the household. The victim’s wife is now a widow of the age 26. The family is trying to bring it to the notice of the Government and the locals, the apathy of the GMC hospital and health ministry.

This isn’t the first time that GMC has shown carelessness towards their patients. According to Goa Prism, an appalling case of medical apathy was reported in Goa, where the medical college disposed of a 24-year-old man’s corpse along with other unclaimed bodies of the mortuary. The incident came to light when the man’s family visited the college to collect their son’s body but they were left in shock after they were informed that the body had been disposed of along with unclaimed bodies.

Does this make one question as to who to depend on when matters of emergency and situation of life and death arise? The insufficient staff, lack of proper facilities and improper emergency management are what is existing in a hospital that majority of the people in Goa depend on!

Some even claim that this kind of behaviour is meted out purposefully so as to force people to admit patients in private hospitals. These kinds of events raise the question on humanity and morals of the Medical industry and make one fear about the safety of their health and lives.

Join the growing list of subscribers!
Advertisement
PrevPreviousTraffic Sentinel Scheme Backfires, Goans Take Law in Their own Hands
NextForeigners Coming on Tourists Visa Get Involved into the Commercial Activities in GoaNext