Why are Goa Government Schools in a Shoddy State?

It is a sad state of an affair that the Goa government has failed to uplift the standards of a Government school in the state despite the fact that majority of children from the lower income background in the Goan villages pursue their education in these schools. The primary education is the foundation of future studies.

The recent report of a government primary school being housed in a thatched shed in Cotigao village is another reminder of the deplorable state of affairs of the government-run schools in the state, particularly in the rural areas, which do not have the basic necessities and infrastructure.  It is not only an unhealthy indicator of school dropouts, but also why students opting to travel to private-managed schools.

It also pales in comparison to swank private schools or privately managed, aided schools which offer world-class facilities to students who can afford private schooling.

Understanding that education plays a major role in every child’s life, the Union Government may have made the Right to Education a fundamental right (RTE Act 2009), but government schools are lagging far behind in providing the basic infrastructure to provide the quality education.

Goa may have the highest literacy rate only second to Kerala, but most educational institutions run by the government, especially primary schools in rural areas are severely lacking in terms of buildings, classrooms, playgrounds, toilets, Potable drinking water facilities,  quality mid-day meals, and proper or adequate teaching staff. 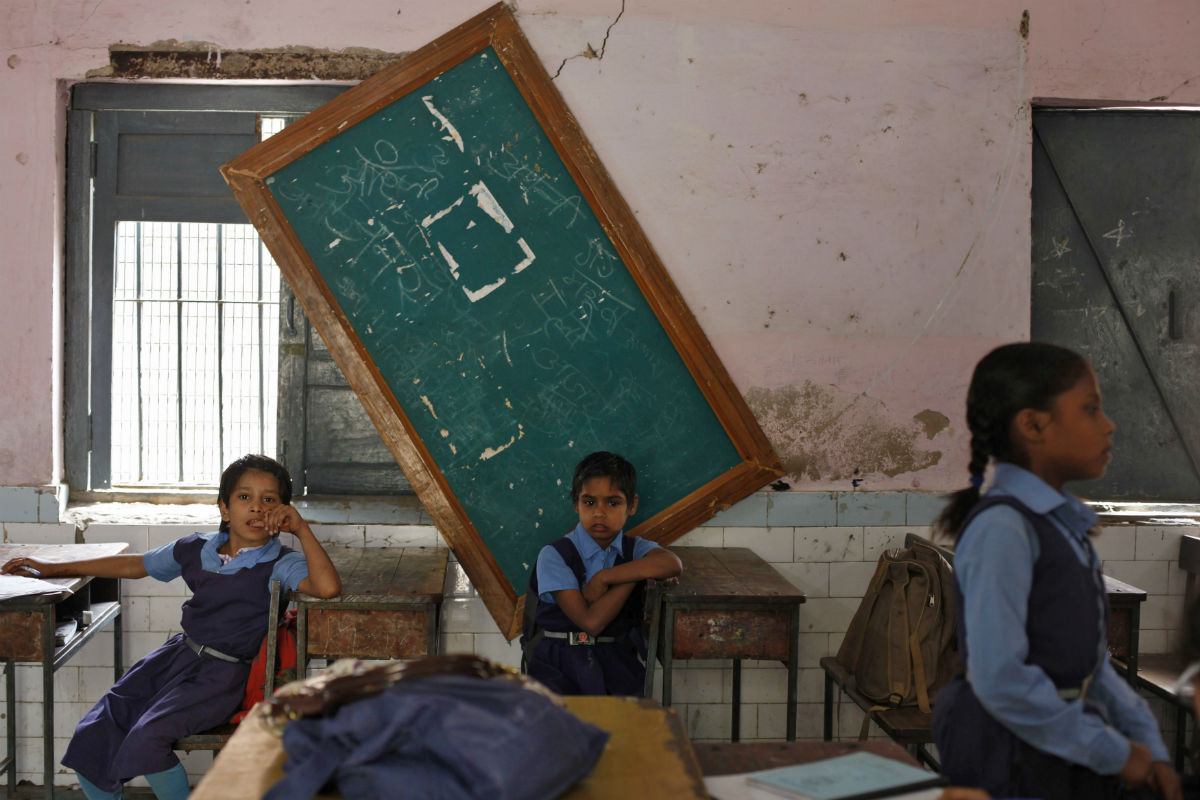 These inadequacies have been frequently making the news.

In what can be termed as another gross apathy, small children were made to attend class at a thatched shed in Cotigao as their school undergoes repairs. According to a Times of India report, a government primary school is run from a thatched shed at Avli, Cotigao, with children sitting among broken furniture and a makeshift table.  This school which caters to the schedule tribe dominated rural area has marked an attendance of only 5 students from the regular 45 since the school opened on June 6.

According to this source, parents are reluctant to send their children to school in the makeshift hut in the light of it being unsafe and without toilet facilities either.

Further according to the source, the two-room school which was taken up for repairs during the last academic year and now again the repairs which were to be completed within two months have stretched to 10 months. While the School’s PTA Chairman, Mono Velip is trying his best to assist, by earlier offering them the verandah in his house and now his make-shift business hut, he expresses his helplessness and says once the monsoons start it will be very difficult for the children.

According to a Times of India report, in 2018 the Chairman GSIDC (Goa State Infrastructure Development Corporation) had reportedly stated that 50% government schools had been repaired and completed on time  In 2018, the DoE identified around 50 government primary schools which were in disrepair and needed upgrading.  The repairs and maintenance of these schools have been handed over to the GSIDC.  While 344 are repaired the others will be completed within 2022

But going by the current statistics and frequent reports, of schools like those in Cotigao, much more needs to be done on a war footing.  It needs to be reasoned if the government is investing such a considerable amount in the cyber age and other schemes it does have the finances and means to invest in basic infrastructure and necessities for children at these primary schools, particularly in the hinterland where these are the only schools available.

In an earlier article in Incredible Goa, (Government schools in Goa are lacking quality education) shared Calangute Michael Lobo’s views on the need to revive all government primary schools across the State.  (as quoted in Navhind Times). “Educational reforms and necessary changes in the system are vital to woo back the confidence of the parents in government schools.   Along with infrastructural improvement, the need for an improvement in the standard in governmental schools is also important, he stated, in order to bring government schools on par with private schools.”

According to a Herald report, a government school in Devshirme, Usgao Ponda Taluka recently recorded 100% results. This result is heartening and comes amidst the fact that their school building was in urgent need of repairs once again after shoddy repairs.  As of now, the students have been shifted to a temporary private building.

But the continuing shoddy state of the government schools will perhaps tell a different story.

These factors are perhaps an indicator as to why many parents, who can afford it, are sending their children to private-managed schools that are mushrooming in the state.

According to a Times of India report, official sources indicate that the number of students in government-run schools has been dwindling since the last decade.

Educationists say parents in cities are queuing up for admissions in private schools, while their counterparts in rural areas prefer to send their children to government-aided schools in the cities.

According to a 2007-2008 survey by the National University for Educational Planning and Administration (NUEPA), in Goa, 64.11 %, (the highest percentage in the country) of students at the primary and mid school levels sought enrolment in schools run by private management and aided by State government.

Speaking to TOI, Ramesh Gauns, teacher and activist and part of SSA says, due to economic development parents from rural areas want their children to be admitted in city schools, while parents in cities eye elite schools.  The schools that children study in today are viewed as status symbols. Parents feel that schools that charge more are better schools.

The reasons for the shifting paradigm, according to Times of India, is besides better basic infrastructure in terms of proper classrooms, toilets, etc. parents in Goa who were favoring private aided schools, are fast shifting their preference to unaided schools, which causes an obvious shift to English medium classes.  From swimming classes to innovative learning and affiliation to national and international boards or a mix of the syllabus and multiple boards, parents feel these schools offer better exposure and scope for the child.

According to this source, statistics indicate that more than 15% of students studying from classes from I to VIII in Goa are today enrolled in private unaided schools.

The elections are over and fresh promises have been made.  It remains to be seen if the government will fulfill this one to brings it primary schools on par with the best and give children, especially those in rural areas, the education they deserve.

Join the growing list of subscribers!
Advertisement
PrevPreviousNipah Virus Strikes in Kerala Again, Goa too on High Alert
NextGoa’s Marine Life Suffer Due to Piling Garbage on The BeachesNext