Only Persons Born in Goa can change Names in the State, Why? Check out Here… 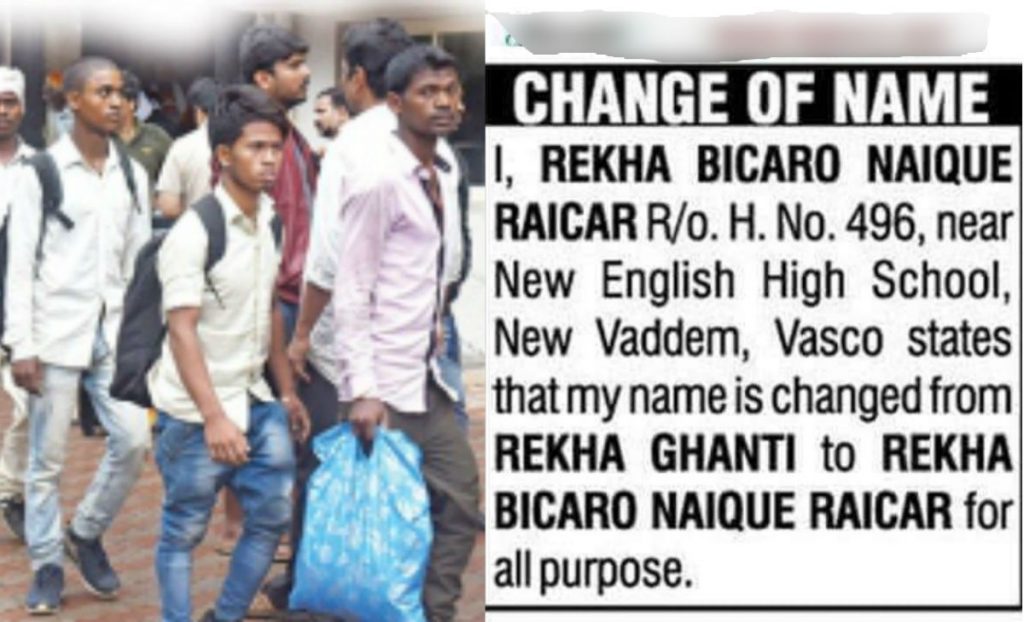 Goa has become a hub for the migrants to settle down and change their names with Goan origin and recently the frequency of changing names has increased drastically. It takes just a release of an advertisement in the newspaper with and a lawyer who guides this process to change the name and to stop this malpractice the Goa government have come up with the strict warnings for the people who change their names illegally and most probably this will reduce the ongoing rampant process.

The legislator of Curtorim Aleixo Reginaldo Lourenco has alleged that there is an increase in migrants changing their names and surnames and resorting to local names in Goa with an ulterior motive. He further added that name change is done without much difficulty. Showing a local ‘name change’ advertisement cutting, one Ramesh Lamani changed his name to Ramesh Naik. He has demanded that law minister Nilesh Cabral take note of such cases.

According to information, nearly 500 to 550 names and surnames are changed per year on an average by Goa-born citizens mentioning genuine reasons that include of change of religion or that they are generally known in their locality by their newly-accepted name.

However, the dozens of name change advertisements that appear in the local dailies on a daily basis raises an important question, as to whether such changes are accepted as valid documents in government offices.

Sources have cited that one name or surname change takes place every two days in Salcette taluka. Anonymous sources speaking to The Navhind Times mentioned that all applicants follow legal procedures and once the process is completed there is no need to publish an advertisement in the local newspapers.

According to Section 3 of the Goa Change of names and surnames Act, 1990, any person desirous of changing his name and surname or both, as per the recorded details in the birth register, can apply for the same. On receipt of the application, the concerned registrar issues notice on the office notice board and publishes a relevant notice in the official gazette, calling for objections within 30 days. If any objections are received, the registrar has to conduct an inquiry and pass relevant orders within 60 days. The subsection 4 of Section 3 says that the registrar can call for he extract under section 17 of the Registration of Birth and Deaths Act, 1969 (Central Act 18 of 1969). The aggrieved party can subsequently go in for an appeal before the Chief Registrar of Goa and once the legal process is completed; there is no need to publish an advertisement in the local dailies.

Former sub-registrar of Salcette and current registrar of Tiswadi, Suraj Vernekar said that once the process is completed, a certificate is issued to the applicant. “Form B is issued where the applicant’s original name is mentioned. Advertisement published on newspapers denoting the change in name cannot be considered a legal and valid document. None of the offices can accept it.”

Sources said that many names and surnames are being changed in Goa and local names are obtained with an eye on huge tracts of land of people, who have left the State for greener pastures and settled abroad. It is learned that ‘agents’ helping applicants in obtaining passports accept the newspaper advertisement cutting relating to change in names.

Viriato Fernandes, of civil group Goencho Avaz (voice of Goans), told ucanews.com that there are about 1,600 illegal name changes made each year. He said his organization, which promotes the interests of Goan people, will seek an investigation into this “scandalous practice.”

Many doubt the rush to change names is to claim pre-colonial ancestry as the Portuguese government only offers citizenship to people born in Goa before India annexed the colony on Dec. 18, 1962.

People born before Dec. 19, 1961, are eligible for citizenship, as are their children.

However, ineligible Indians, particularly from and around Daman and Diu, a former Portuguese colony near Gujarat, exploited the offer and gained Portuguese citizenship before eventually migrating to Europe.

Records now prove that several people from Gujarat adopted the identities of dead people buried in Goa to apply for Portuguese passports and migrate to Europe.

But others like Paulo Colaco say they adopted a Portuguese name for practical reasons. The Hindu from neighboring Karnataka state said he changed the name “because it’s easier to deal with tourists as they are friendlier once they hear such names,” he said.

“Foreigners are more open in their dealings. They are suspicious of others with non-Christian names and look down on them,” said Colaco, who declined to reveal his original name. “I like to be looked upon as a Goan.”

He said he speaks English, dresses like a Goan and “even my mannerisms are Goan.”

He said he chose Colaco as his name because his landlord had that name. But he said the moment the landlord found out about the name change, “he threw me out of my apartment.”

The landlord was justified because “there have been several cases of land fraud by producing fake documents with false names,” said Euclid Heredia, a lawyer.

Congress Party lawmaker Lourenco wants a proper investigation into how migrants change their names so easily.

“They do these changes without encountering any obstacle. This is of serious concern and the government ought to initiate a thorough investigation in the matter,” he said.

In some cases, it is alleged names are changed to grab huge tracts of land belonging to local people who have migrated overseas.

“One trick is to identify properties belonging to owners overseas, or who have died, then use their names to compile false documents making them out to be the owner,” according to Fernandes from Goencho Avaz.

The property is then sold several times through agents so that it becomes difficult to trace the person who first doctored the land documents.

“Investigations, if at all started, get delayed because the investigating officials get transferred, so it could take years before justice can be done, if at all,” he said.

According to the Statement of Objects and Reasons, “The Bill seeks to amend Section 3 of The Goa Change of Name and Surname Act, 1990 (Goa Act No. 8 of 1990), so as to lay down a proper procedure for changing the name and surname of a person. The Bill also seeks to insert a new Section 3A in the said Act so as to prescribe a penalty for not following the procedure as laid down under the law for such change of name and surname.”

The new procedure is as follows. Those desirous of changing their names/surnames in specified cases (wrong or improper entry; correction of spelling; unpleasant or distasteful name/surname; erroneously written name/surname) “shall apply to the Registrar of respective jurisdiction in which his birth is recorded in the prescribed form along with an affidavit for correction of name or surname or both mentioning therein details like name, date of birth, parents’ name, name of the spouse, residential address, etc and submit documents in which version of existing name or surname is mentioned”.

After receiving the application, the Registrar will publish a notice mentioning the applicant’s change of name and affix it on the notice board of his office. The Registrar shall also publish the notice in an official gazette and two local dailies or newspapers having a wide circulation, within 30 days from the date of the notice.

As per the Bill, an individual who changes his/her name, surname or both, or publishes any notice or advertisement for the same without following the laid down procedure, “shall be punished with imprisonment which shall not be less than seven days, but not exceed three months”.

The amendment proposes to make offenses under the changed law cognizable, which means that an individual can be arrested without a warrant.

Join the growing list of subscribers!
Advertisement
PrevPreviousVisitors Creating Garbage Menace on Tourist Spots in Goa, Who is responsible for this?
NextTotal 13 Major Roads across Goa Have Been Marked as Pitfalls by Transport DepartmentNext