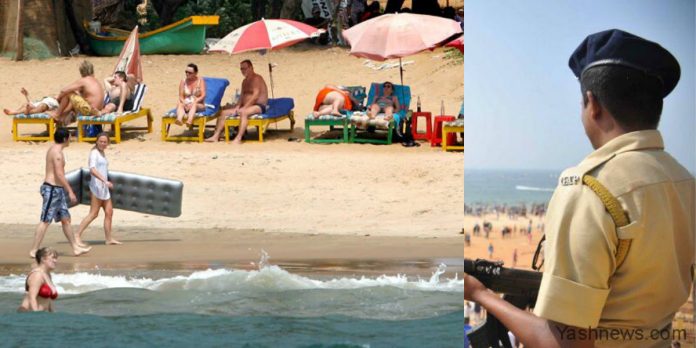 There are news making rounds on various media sites about Goa being on terror alert following the attack in Christchurch. This sounds a little weird, right?  Every time something happens in the world, Goa seems to comes into the picture but why has the Christchurch terror attack, that took place in New Zealand, affected Goa?

New Zealand has nothing to do with Goa and it has no political connections, but still, Goa seems to be on terrorists’ radar and we have worked out a bit of an equation that might shed some light on the reason why.

Goa attracts tourists from all over the world but Russians and Israelis are frequent visitors as they have chartered and relatively cheap flights to come to Goa.  Israelis have been coming to Goa right from its inception and they have set up businesses as well as a synagogue (Jewish place of worship) in the state.

It’s well-known that Jews and Muslims have been fighting over land in Palestine and Israel for many decades, resulting in bloodshed and thousands of deaths.

Israeli people are mainly Jewish and so it would possibly mean that Muslim terrorist organizations target tourist destinations which would cause the widest possible destruction of life and their target would be against religions not in check with their incorrect interpretation of Islam and is widely condemned across the entire world by Islamic scholars, priests and believers alike.

According to some reports, police are closely monitoring and regularly patrolling busy areas where Israeli folk has made their second homes. “We have to keep a lookout and secure areas frequented by Israeli tourists as well as a prayer house they have in North Goa. The threat, according to the inputs, comes from a possible attack by Islamic State or the Al-Qaeda to avenge for the New Zealand mosque killings,” a senior police official said on condition of anonymity.

The attack on the Christchurch mosque was targeted towards the Muslim community and India has always faced threats from Islamic terrorist groups making Goa even more vulnerable to attacks, said the sources.

The Christchurch shooting killed 50 people including a 3-year-old infant, and this makes the gravity of the crime even more severe. The Christchurch mosque shootings were two consecutive terrorist attacks at mosques in Christchurch, New Zealand, during Friday Prayer on 15 March 2019.

The attacks began at the Al Noor Mosque in the suburb of Riccarton at 1:40 pm, and continued at the Linwood Islamic Centre at about 1:55 pm. The gunman live-streamed the first attack on Facebook Live, leading to an outcry against social media and correct procedures not being used to prevent such videos being shown.

Meanwhile, the body of a 27-year-old woman from Kerala, who was among the 50 killed in Christchurch terror shootings, was brought to the state on Monday and laid to rest, claims the report published by ABP Live.

Prayers were held at the Cheraman Juma mosque at Kodungallor before the body of the woman, Ancia Alibava, was laid to rest. The mosque is said to be the oldest in the Indian subcontinent. Ancia was pursuing her M.Tech degree in an agricultural university in New Zealand. She had gone to the mosque to offer prayers along with her husband Abdul Nazar when the shooting took place on March 15 during Friday prayers, reported news agency PTI.