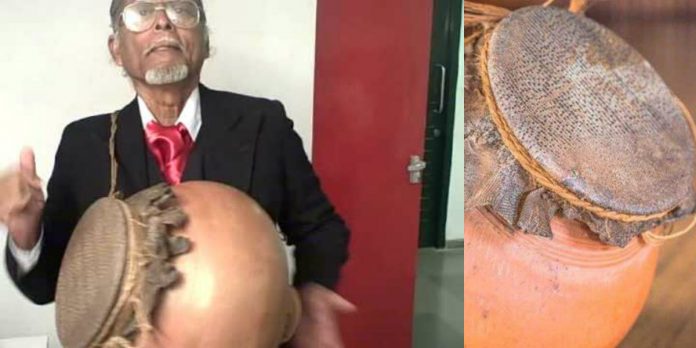 Goa is a small state that lays in the west of the Konkan coast. Although the state is the smallest in the country, it still breathes a life of its own. The vibrant culture, cuisines, and heritage of this state are something that draws the attention of the world. From the Portuguese dominance to the hippie movement- from the laid-back Goan vibes to what is now a fast developing state- Goa has come a long way to make its mark.

Now, on its way to make another mark, Goa is on the process to declare Ghumot as a Heritage instrument of the state. According to The Hindu, Art and Culture Minister Govind Gaude said on Monday that Ghumot will be notified and shall be soon elevated to the status of a heritage instrument of Goa.

Stating that 99% of the work regarding this has been completed he said “It will be a proud moment for Goans. The Ghumot has travelled across India and the world. Once it is declared as heritage instrument it will receive a boost and can be promoted in other parts of the world,”

A part of the rich Goan folk culture, Ghumot is the oldest percussion instrument of the state. It is quite a popular instrument among the western states of the country like Goa, Maharashtra and Karnataka. According to Ritz Magazine, an indigenous earthen drum, Ghumot is an instrument played during Ganesh Chaturthi ‘aarties’, and is fashioned as a designed clay pot, with the skin of the monitor lizard stretched taut across the pot’s mouth, forming a drumhead.

Due to the reason of the use of the Monitor lizards, which are classified as endangered wildlife species listed in Schedule, I of the Wildlife (Protection) Act, 1972, Ghumot was earlier, banned by the forest department. But now, artisans have come up with an alternative for this and have replaced the skin of Monitor Lizards with that of a she-goat. This caused a rise in the interest of the instrument among people.

Speaking about this dying art and the need to conserve it among the soils of the state, Postmaster general, Goa region, N Vinodkumar said the magical sound of the Ghumot which is one of the oldest percussion instruments in Goa, helps people forget differences of caste, religion and opinions.

The folk music, dance and traditions form to the essence of a region. The history and heritage of the state of Goa are rich and vibrant. With the rising modernization, we tend to forget our roots and culture. This is one such move to revive the lost art of this state and help people connect to their history. What do you think of this?